See the picture. One of the ways I walk in my neighborhood goes by a fenced property, and on the fence is a sign, “Beware of Dog.” 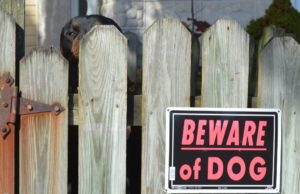 That sign provides information, useful information I think as the dog looks to me sturdier than the fence, but also warns and intimidates. The sign not only reminds me that the property is not mine to enter but also serves to threaten me with harm if I foolishly choose to enter anyway. When I have walked by on the sidewalk, the rottweiler to which the sign refers has jumped against the fence and barked at me until I have passed. Neither my walking in the street nor speaking softly to the dog made any difference. Since I could not sooth the dog, I took its picture, and now I walk on the other side of the street or go a different way. Would the rottweiler really bite me? I don’t know, but neither do I intend to find out, which is the whole idea of the sign.

While I am not retracting my previous post about the Confederate monuments that have become focal points for controversy throughout our nation and do continue regard them as more about intimidation than history, I am taking a step to one side so I can look from a slightly different perspective. Maybe, with the help of a friend from our days as classmates in seminary, I am attempting a half-step away from my whiteness. Or maybe it’s just a reality check. Or both.

I said and say again that the monuments represent white dominion. What I need to remind myself, however, is that they are not the reality of white dominion but merely its representations. Without societal forces behind them, the statues would be just statues. Removing them is, I contend, the right thing to do, but doing so will not remove the realities they represent to living people, white and black. Neither is the needed change only about individual minds and hearts, important as such inner change is. Behind the statues are many layers of real systemic injustice that continue in our society.

My friend and former classmate Jon is black, and I am white. Jon’s skin, of course, is not truly black and mine, though pale, not truly white, but so we are labeled in society. One day as we were talking about race-related events of that time (around 1970), Jon told me something so obvious as to not need saying, except that it did need saying. I am paraphrasing as I don’t recall his actual words. He said something like, “Dick, you don’t have to think about race or skin color very often. You can go days or even weeks without paying any attention to your race or even having it come to mind. But whenever I have forgotten about race even briefly in public, out there with white folk, I have paid for it.”

I suspect most black people on most days walk by those Confederate monuments without really noticing them, until maybe they experience some sharp reminder of the white dominion those monuments represent and suddenly see them again. Certainly, just removing the monuments won’t improve their lives much, any more than removing the “Beware” sign would remove the dog.

I am not suggesting those intimidating monuments to the continuing force of the Confederacy don’t matter. I am saying the monuments themselves don’t matter enough for their removal to be enough of a change. Do hearts and minds need to be changed? Yes, which is why countering hatred and violence with opposing hatred and violence will not help. But the devils of racism and injustice are not only in the minds and hearts of individuals but also in the very structures and systems of society – of economics, business, real estate, finance, religion, and education. Racism is systemic, built into our systems, and so it continues to work its evil even without anyone’s deliberate thought or intention.

We must oppose the rampant hatred and destructive false pride of white supremacy. We must rescue black, Jewish, and immigrant children from its violence, and we must save white children from its seductive power to destroy them by playing upon their own fear, pride, and need to belong. We must also preserve our history, but the real history which includes the many ways in which slavery was indeed replaced with systemic racism. Otherwise, I can easily imagine that a black person might just caution us, “Leave the monuments alone. Unless you’re ready to make real changes in the way life works for people, in the way things are arranged to work for some people and against others, don’t just take down monuments and walk away patting yourselves on the backs as though you had just done something great for which I should thank you. I won’t thank you because, unless you do more to tame the dog of racism in our systems, I’m the one that dog you’ve angered is going to bite.”